Suppose you spend a lot of time away from home, boon-docking in your camper, tailgating, or tent camping away from civilization. You may already be familiar with the appeal of a portable mini generator. These smallest portable generators, usually the size of a tiny duffle bag, can produce enough power to charge your devices and even run some lights, fans, and TV for a few hours each night. They’re handy to run power tools at a worksite, or even run your fridge at home if there’s a power outage.

They run on small gasoline motors and provide hours of 120-volt household electricity for many hours. But how do you pick the right one? Here’s a look at the best compact portable generators and the most critical aspects of picking one for your adventures.

Unless you stay near an outlet at a campground or RV park, you will be leaving the world of unlimited power behind. Your car or camper keeps a little bit of power in its batteries, but unless you’ve got a big, costly electrical system built-in, you aren’t likely to be able to use some of the conveniences you are used to.

Luckily, compact portable generators are a great solution. They’re about the size of a small suitcase, and they can run for many hours on a tiny bit of gasoline. You’ll have enough power to run your favorite appliances and charge all your toys.

The Briggs & Stratton is a small, sleek-looking generator with all of the features you might want. It’s built specifically for camping and tailgating, so the priority was placed on making a lot of power come out of a quiet and portable package. It makes 2,200 watts starting and 1,700 watts running, while only weighing 54 pounds. Its one-gallon fuel tank can run it for eight hours at 25 percent of load, and its a little quieter than a typical conversation at 59 decibels.

There are a few pros that set the Briggs & Stratton apart from its competitors. For one, it has a unique H-shaped handle system that makes it easy to maneuver by either one or two people. It is backed by a reputable brand name that has a history of making great small engines. This generator also claims to have inverter technology that is smooth and safe for the most sensitive electronics.

The Wen 1,250 watt generator is an incredibly light and sleek model. It doesn’t make as much power as the Briggs & Stratton above, but it makes more than enough for most tailgating or camping expeditions. Like other models in this price group, it comes with two built-in USB ports for device charging and operates at a quiet 51 decibels. There are two 120-volt outlets, and Wen advertises that it produces power without damaging fluctuations, so it’s safe to use with TVs and computers. It can be paralleled with another generator to make more power with an optional accessory cable.

The Westinghouse 1,200 watt generator strikes an outstanding balance of size, portability, and power. It makes enough energy to run whatever you need to run, and its small footprint and 33-pound weight mean its easy to take anywhere. To keep it running efficiently, variable engine speeds allow 30 to 50 percent higher fuel efficiency than other generators.

The Westinghouse provides two 120-volt AC household outlets and two five-volt USB ports for charging. According to their website, this generator also produces safe power for sensitive electronics, like computers. With an optional cord, the iGen1200 can be paralleled to other generators for more wattage.

Here’s a slightly different way to power your gadgets when operating off-the-grid–a portable battery pack with a built-in inverter. The Jackery packs a performance Li-ion battery into a small package, and you get one USB-C 3A port, two USB 2A ports, and a 110VAC household plug. It can’t run heavy equipment like refrigerators or blenders, but it’s plenty to turn on a TV or charge a laptop.

If you add the additional solar panels, you can get a completely renewable off-the-grid power generator solution for your handheld devices. The 100W solar panel could theoretically charge the unit in a little over three hours in the full sun. A better option for most people would be to charge the unit’s battery while traveling in the car using the car’s DC charger.

This battery pack is basically the Nissan Leaf of the gas generator crowd. It does nearly the same thing as gas generators, without carrying around gasoline or dealing with any noise or carbon monoxide and fumes. It’s a great option if you’re looking for something to charge your devices, but it can’t run bigger power-hungry items. According to Jackery, the Power Station Explorer specifically cannot handle CPAP machines, toasters, heaters, hairdryers, electric drills, electric kettles, induction cookers, rice cookers, or blenders.

The Earthquake portable inverter is one of the smallest gas generators you can buy. And since its small frame only produces 800 watts, it’s miserly with fuel consumption. Only weighing 21 pounds, it’s incredibly lightweight and portable, too.

Its small output is also the biggest downside of this generator. While it keeps it light and fuel-efficient, it’s not enough power to run household items beyond TVs, fans, or laptop chargers. If you want to use a power tool, crockpot, or heater, you need at least 1,200 watts. With so little power output, you might be better off with a portable battery pack. You’d get to charge your devices and skip the noise and fumes associated with a generator.

Lightweight, portable generators are handy items to have around, but they’re pretty grand for off-the-grid adventures. Having even just a little bit of electricity means that you can have a few more luxuries, and with just an hour or two of running, you can top off all of your devices and cameras for the next day’s adventures.

If you’re camping in a van or camper, a portable mini generator means you’ll have plenty of AC power for anything you’d like to use. Feel like cooking on an electric hotplate instead of over the campfire? Want to use your Keurig coffee maker? How about an Instapot dinner? All of these things can be done pretty quickly with a generator purring just outside. A larger generator might also run your camper’s air conditioner for a few hours to cool off at night!

Generators can also help keep your batteries topped off. If your car won’t start, a cheap battery charger is all you need to get running again. On a camper with house (domestic) batteries, you likely already have a charger set up. All you have to do is plug in your generator, and you’re in business.

It’s essential to realize the types of power available when camping and when to use what. DC (direct current) power comes from battery systems, like those in a car or camper. It’s also used by electronic devices, like computers and phones. To use those, you’ll need to buy a DC-to-DC charger because, unfortunately, DC power comes in a wide variety of voltages. Most cars and campers have 12-volt systems.

AC power (alternating current) is what we’re used to plugging into at home. This type of power is supplied at 120 volts in the United States, but standards differ worldwide. Our laptops and devices come with plugs to convert it to DC for charging, and most home and kitchen appliances run on it.

It’s also a good idea to have one of these portable mini generators on hand for home emergencies. If your power goes out, you can run your generator to power your fridge and a few essential household items until the power comes back. 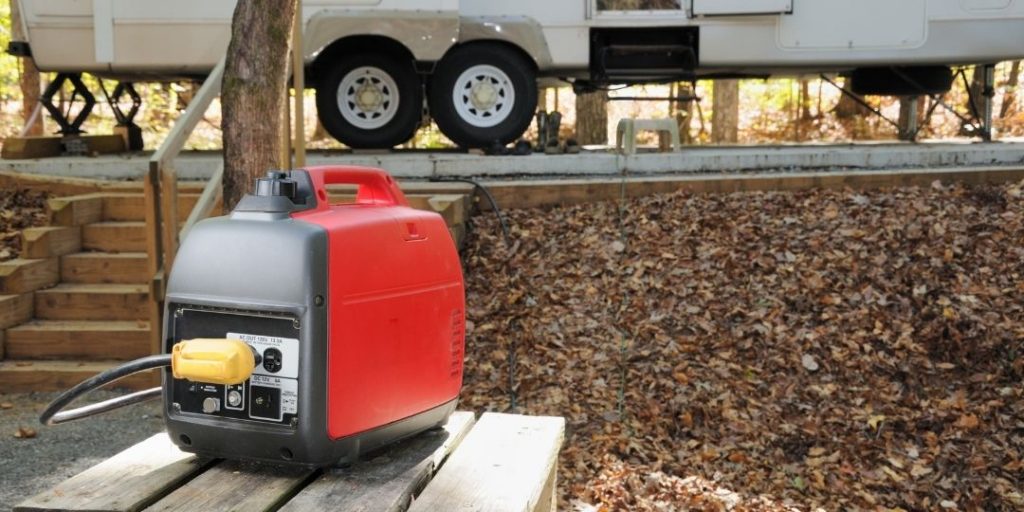 By far, the essential part of picking a generator is getting the right mix of output, portability, and affordability. Remember that small gasoline engines run these generators, and as such, they will occasionally require some routine maintenance like oil changes.

The output of the generator you need is determined by what you want to run. Nearly all household items have their wattage labeled, so for example, a 1,200-watt coffee maker would need a generator that produces at least 1,200 watts to function, plus a little more for losses in efficiency. Generators are usually rated in running watts and starting watts. The starting watts is higher, but the unit can only run at these levels for a few minutes. The running watts should be considered the maximum continuous output of the generator.

All compact portable generators will output 110-120 volt AC power, but some of them also include built-in USB ports for your devices. That’s a nice feature, but remember you’ll probably still need your charge cables for things like laptops.

If you want to expand or occasionally want more power, a few models offer the ability to connect two generators in parallel. Two generators, each with outputs of 2,000 watts, could make 4,000 watts total. That would come in handy for home power applications, or if you’ve got some big consumers you’d like to run.

The portability of a generator is mostly dictated by its weight. New designs are small and light, much like a small suitcase. Of course, the smaller the generator, the lower the wattage it produces, so you’ll have to carry a bigger generator if you need more power.

Another important factor worth noting is the noise a generator makes. These mini generators run off of small air-cooled gas engines, much like weed eaters or lawnmowers. They run at full power, so they are pretty loud. Luckily, newer designs keep them muffled well, and the better models are quiet. They are rated based on decibels, a measure of the noise level. But the ratings are somewhat variable, so make sure you understand how the model you are looking at gets rated. Unless you are using it at a construction site, no one appreciates a noisy generator!

Lightweight, portable generators are great items to take camping, and they’re handy to have in case of power outages. When shopping, be sure to think carefully about what you’d like to run off of them since it’s easier to buy a slightly large generator in terms of capacity. A generator that doesn’t do everything you need it to will not only be a disappointment, but it will get less use. For the camper, tailgater, boater, or RV owner, mini generators add a definite luxury touch no matter where you venture out.

Best Tank Tops with Built in Bra for Active Women