Planning a road trip? One of the most famous locations to visit in the United States outside of the Grand Canyon happens to be Bryce Canyon National Park in Utah. The site has been carved out over a million years. Though rugged, Bryce Canyon is full of life and fascinating sights. No wonder travelers are always eager to check out the astounding rock formations, hiking trails, and more.

Here are some facts about Bryce Canyon to make your trip even more epic:

Where is Bryce Canyon Located?
Bryce Canyon National Park is located in Utah, in a rather remote area of the state. It is often considered a part of larger parks, namely Zion National Park, which is about 90 minutes away by car. Getting to Bryce Canyon may take a while from any major city, but once you are there, you find yourself surrounded by mesmerizing red rock. Reaching some of the more famous rock formations, such as the arches or canyon lands can take up to 5 hours of driving.

Make sure to bring plenty of snacks.

When was Bryce Canyon Discovered? 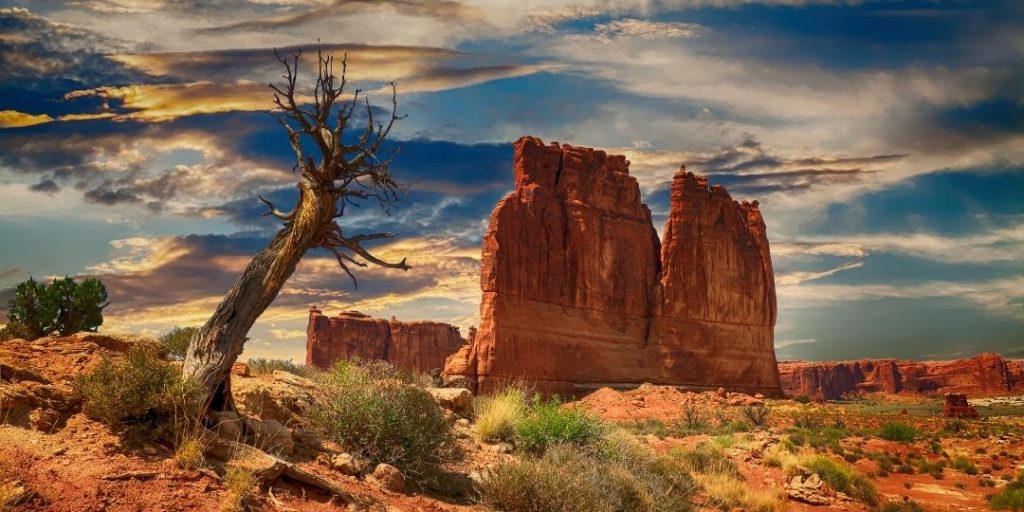 Here is a fun fact about Bryce Canyon to entertain people at parties or on a hike. The park was discovered in the late 1800s by Mormon settlers. In 1887, Ebenezer Bryce and his family decided to set up a ranch in Bryce Canyon after leaving Arizona. He built a household and roads throughout the area. It is reported that, when he showed the remarkable canyons to visitors, Bryce stated, “It’s a hell of a place to lose a cow.”

Before the Mormon settlers ever made their way into Utah, though, the area was populated by Native Americans, including the Southern Paiute, Goshute, Hopi, Ute, and Navajo tribes. The Paiute Indians also say that the hoodoo rock formations are “Legend People,” or those who were transformed into stone by Coyote, a trickster god.

What is Bryce Canyon Famous For?

We already started mentioning it earlier, but Bryce Canyon has some incredible geology. However, calling it a canyon is a mistake. Bryce Canyon is actually a natural amphitheater that has been carved into the Paunsaugunt Peninsula for millions of years. Wind and water erosion contributed to the jaw-dropping colorful hoodoos, arches, pillars, and hills. It’s the largest collection of hoodoos in the whole world.

Bryce Canyon covers 35,835 acres (56 square miles) and also features high altitude regions with pine forests and alpine hillsides covered in wildflowers. There are several points throughout the park that cannot be missed. This includes Inspiration Point, where you can see the hoodoo rocks and the Boat Mesa; Bryce Point, with its naturally carved arches; Fairyland Canyon and Sunrise Point; and Rainbow Point or Yovimpa Point, where visitors can witness the spectacular Pink, Grey, White, and Vermilion Cliffs. 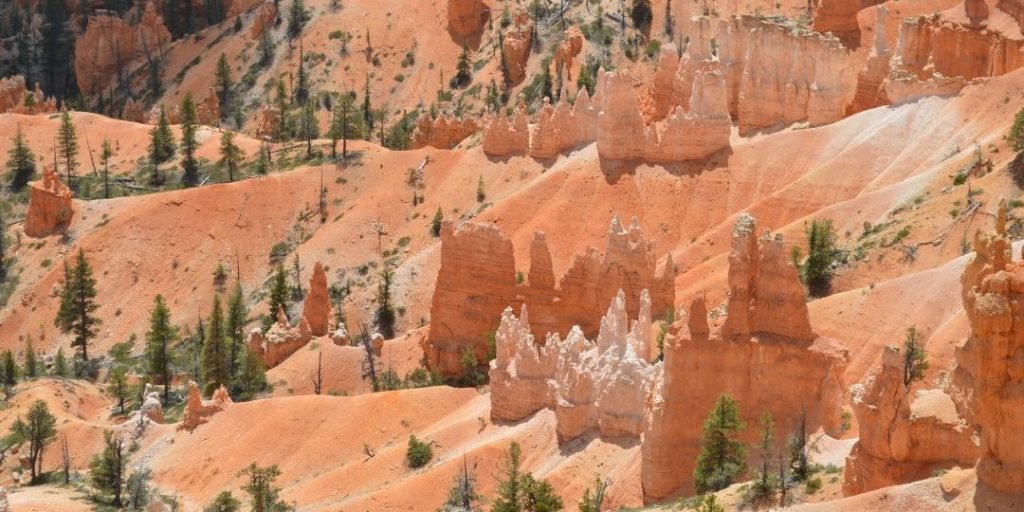 There are so many things to see in Bryce Canyon National Park that you may have to spend a few days in the area just to catch a glimpse of everything. Here are some more facts about Bryce Canyon to entice you to visit sooner than later:

Bryce Canyon City offers up some of the best views of the amphitheater section of the park. On a cloudless day, you can easily see for 100 miles in every direction. Furthermore, when the night sky is clear and there is a new moon, be sure to look up. Over 7,500 stars are visible during that time.

Although it may seem old when compared to a human life span, the geology of Bryce Canyon is actually rather young. The youngest of the rock formations are found along Colorado Plateau and date back only 65 million years, around the time of the Cretaceous period.

Being that the park is so expansive and covers all kinds of terrain, you can find all kinds of wildlife. For example, black bears, mountain lions, and foxes all call Bryce Canyon home, though they are rarely encountered. In the higher elevations, a mammal called a marmot (or a “rockchuck” by the locals) can be found.

Bryce Canyon is also a great place to check out plant life. The park may include desert, but that hasn’t stopped over 400 types of hardy plants from taking root and growing.

Did you know that the indigenous prairie dog was once eradicated from Bryce Canyon? The rodents thrived in the climate and landscape until around the 1950s, when they were wiped out. Fortunately, twenty years later, in the 70s, they were reintroduced to the park as an effort to save them from the endangered species list. Now, their numbers have stabilized.

What is the Best Time of Year to Visit Bryce Canyon? 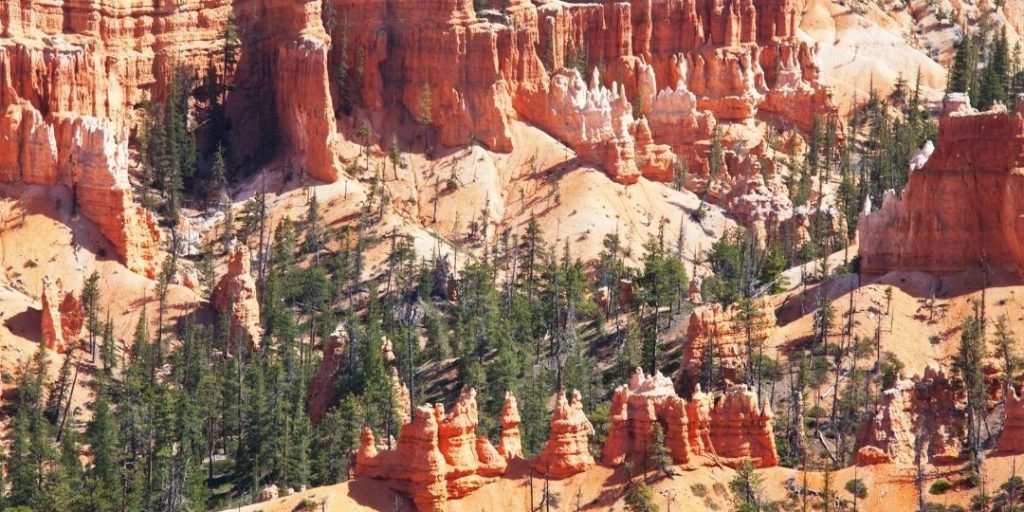 Truly, any time of the year is the best time to see Bryce Canyon. Every season offers something new and exciting to experience.

During the winter season (November through March), Bryce Canyon is exhilarating. The park remains open—as long as the weather cooperates. That means you can partake in winter camping, hiking, and other outdoor activities, like snowshoeing. If you don’t want to fight crowds, winter is the perfect time to visit.

Spring in Bryce Canyon lasts from April to May. Snow continues to linger, but the park starts coming to life. Many of the trails are closed during this time since there is plenty of ice. However, the main park road is open.

The summer season (June to September) is the busiest season and everything is open. This is when the park sees well over a million visitors, so if you don’t mind crowds and want to see the colorful hoodoos in all their glory, this is the best time to visit Bryce Canyon.

Autumn lasts about one month: October. That doesn’t stop it from being majestic. The park quiets down, animals start moving into hibernation, and there is a crisp air descending from the mountains. The only downside is that the weather is very unpredictable.

Ready to take a trip to Bryce Canyon National Park? Knowing some of the interesting facts about Bryce Canyon is bound to make your visit much more fulfilling. The park is massive, and the rock formations will take your breath away. It is one park you won’t mind revisiting again and again.