The world is full of beauty, though most of what we see is often above ground. There are hidden wonders of the world, too, that exist beneath our feet. Finding them is often a stroke of luck. Deep within the Chihuahuan Desert is a network of over 119 caves, known as the Carlsbad Caverns. These majestic caverns are a must-see for any traveler or trekker. We’re going to give you some interesting Carlsbad Caverns facts to get that wanderlust flowing.

Where are Carlsbad Caverns Located?

The Carlsbad Caverns are a series of subterranean limestone caverns and are part of the Carlsbad Caverns National Park, which is located in New Mexico. The caves run through the Chihuahuan Desert, right along the border between NZ and Texas.

How Was Carlsbad Caverns Discovered? 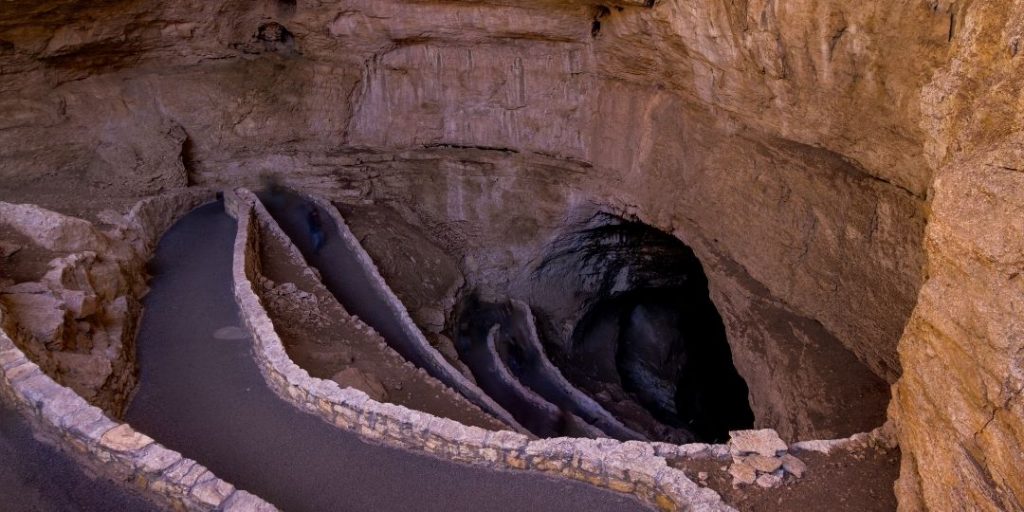 While the question of who was the first to discover the caverns has been up for continuous debate, the most notable discovery belongs to a Texas-born man named Jim White. Before that, many indigenous groups and Spanish explorers, including Cabeza de Vaca, had traversed the surroundings. Some pictographs that were discovered along the course White had plotted dated back over 1,000 years old.

It is believed that the darkness and 60-foot drop was what deterred most people from entering the caves to explore.

White, however, had been exploring the caverns that were located near his house as early as 15 years old, around 1898. He would tell stories about the underground world he had found, but few believed him. Then, in 1915, Ray V. Davis, a photographer, went on a guided tour with White. Davis snapped pictures of the sights as he went. To this day, many of the caverns have kept the names assigned to them by White.

Carlsbad Cavern is at the heart of the National Park and is nothing but spectacular. The underground passages have astounded rock formations, also called speleothems—soda straws, draperies, stalactites, and calcite curtains and ribbons—throughout. There is a lot to see above and below the ground. Whether you are visiting to see the wildlife or want to dive deep underground, there is something for everyone at Carlsbad Caverns National Park.

The namesake cavern (Carlsbad Cavern) is not the largest, but it is the one made accessible to people. There are self-guided tours available around the Carlsbad Cavern, as well as the Natural Entrance trail. You can also take the Big Room Trail, which leads to a subterranean chamber.

If you want adventure, take a guided tour that goes even deeper into the darkness. Reservations and advance tickets are recommended, especially during the busier months.

What are Carlsbad Caverns Known For? 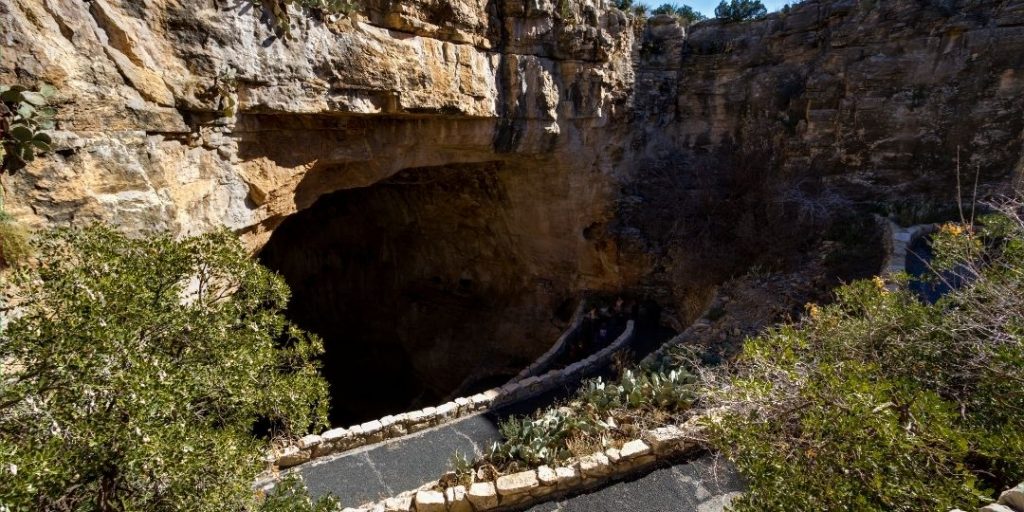 Ready for an awe-inspiring journey? There are plenty of things that Carlsbad Caverns are known for that you cannot leave without experiencing first. Aside from the cave system and the wondrous geology, there are the Carlsbad Caverns bat colonies. Brazilian Free-Tailed bats make up the largest colony, and you can also watch them wake up and go in search of food between Memorial Day to the end of October every single year.

Another famous thing to do in Carlsbad Caverns National Park is the Walnut Canyon Scenic Drive. It is a 9-mile long drive through the Chihuahuan Desert, giving you time to see 750 species of plants, 17 species of bat, 357 bird species, 67 types of mammals, and 54 reptile and amphibian species.

Did you know that since 1924, the Carlsbad Caverns have received over 44 million visitors from all across the globe? More than 500,000 people visit annually. There are few places in the world as accessible and exciting as the Carlsbad Caverns, making them a great place for people of all ages to visit.

But why is the cave system so large? Turns out, the Carlsbad Caverns formed around 4 to 6 million years ago as hydrogen sulfide-rich water began bubbling up through the cracks in the limestone. Those cracks had been forming for millions of years before that, slowly letting in water that once covered a vast part of New Mexico. Water mixed with oxygen, and that is combined with hydrogen sulfide to make sulfuric acid.

The acid ate away at the limestone, creating the magical caverns as we know them today.

Other interesting Carlsbad Cavern facts include:

Which Cave Is The Biggest One in Carlsbad Caverns?

There are several large caverns and caves that are recommended for visiting. These include:

This is the largest, most accessible cave and has been developed for touring by the public. The Big Room is about 14 acres, or 5.67 hectares, in size, making it the biggest cavern in North America. 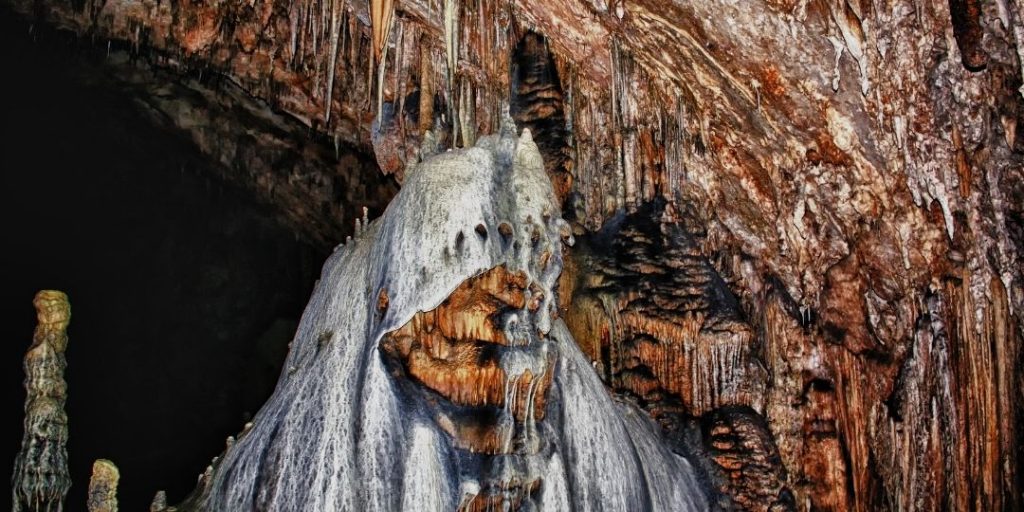 The natural layout of the caverns can make them dangerous, as switchbacks can cause individuals to lose their way if they are not careful. Additionally, in 2019, it was reported that Carlsbad Caverns contain dangerously high amounts of radon.

How Deep Is The Bottomless Pit in Carlsbad Caverns?

Some say the Bottomless Pit doesn’t have an end—but it does. Except it is 140 feet down. That is a long way to go.

What Is The Best Time of Year to Visit Carlsbad Caverns?

The best time to visit depends on what you wish to see. If you are only visiting the underground, then you can go at any time of the year. That is because the cave system stays around 56°F (13°C) throughout the year. It is recommended that you bring something warm to wear.

Above ground is another story. Summer has exceedingly hot days with temperatures soaring above 100°F (38°C) before plummeting to mid-60°F (upper teens Celsius). Wintertime is mild. August and September have the most rain.

Since the park is open year-round, you can visit at any time. If you come between late October to the beginning of May, however, you will miss the bats. Those largely happen throughout the summer.

There are many interesting Carlsbad Cavern facts to study up on, but the best thing to do is visit the national park yourself. Whether you decide to stay above ground or venture into the caves, you are bound to see hundreds of wonderful sights. Be smart when you visit, and be prepared for the fluctuating temperatures.