The world is a visually stunning place, full of lush jungles, sky-scraping mountaintops, blistering deserts, and frozen tundra. Every continent is unique with its climates and civilizations that have adapted to live there, but some places around the world are inhabitable for humans. Badlands, for instance, are some of the driest places on earth, not because they are like deserts, but because they are natural wastelands of precarious rock and little vegetation.

But that doesn’t mean the badlands around the world are ripe with opportunities for adventures and camping! Here are some badlands facts to help you plan your next trip to Badlands National Park and beyond:

Why are Badlands Called Badlands? 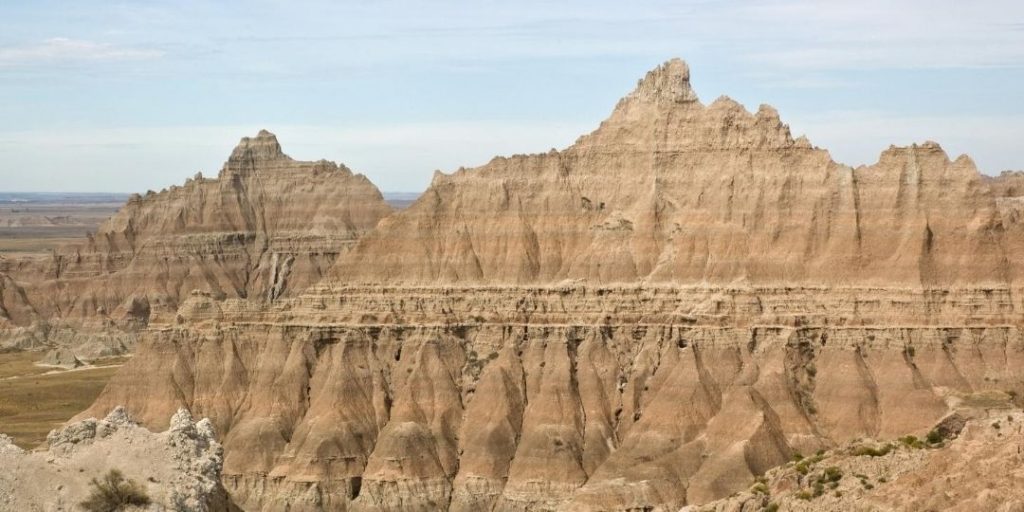 There are a couple of reasons why badlands are called “bad lands,” but the basic badlands definition is this: “extensive tracts of heavily eroded, clay-rich soils, uncultivable land with sparse vegetation.”

The Badlands National Park in South Dakota received its name from the Lakota people, a group of Native Americans who once lived in the Badlands region. The National Park once was their ancestral hunting grounds, but around the mid-1800s, the Lakota, Sioux, and other tribes were forced to leave.

Prior to that, the Lakota tribe called the South Dakota badlands “mako sica,” which translates as “land bad.” This hinted to the badlands climate—extreme temperature fluctuations, little water, and a dry, rocky terrain. French-Canadians who roamed the badlands called it something similar: “les mauvais terres pour traverse”, or “bad lands to travel through.”

But don’t let those descriptions fool you. The Badlands are stunning and make for a worthwhile travel destination.

How are Badlands Formed?

Badlands started to form around 65 million years ago, as the land began to rise out of the sea, creating dry seabeds. Those exposed seabeds had substrates that trapped marine creatures that were later fossilized. Over time, the climate of the newly formed land became humid and warm—the perfect climate for low-lying vegetation. Plants and trees started to colonize the soil, transforming into jungles. But since Earth was rapidly changing, those jungles were exposed to all kinds of natural disasters: flooding, volcanic explosions and ash, mud, sand, and more.

Such events brought in more and more sediment to layer up, until everything compacted and turned into rock. Then, Mother Nature worked her magic again to erode that rock with rain and wind, forming the badlands as we know them today—extensive mesas, canyons, ravines, buttes, hoodoos, and gullies. 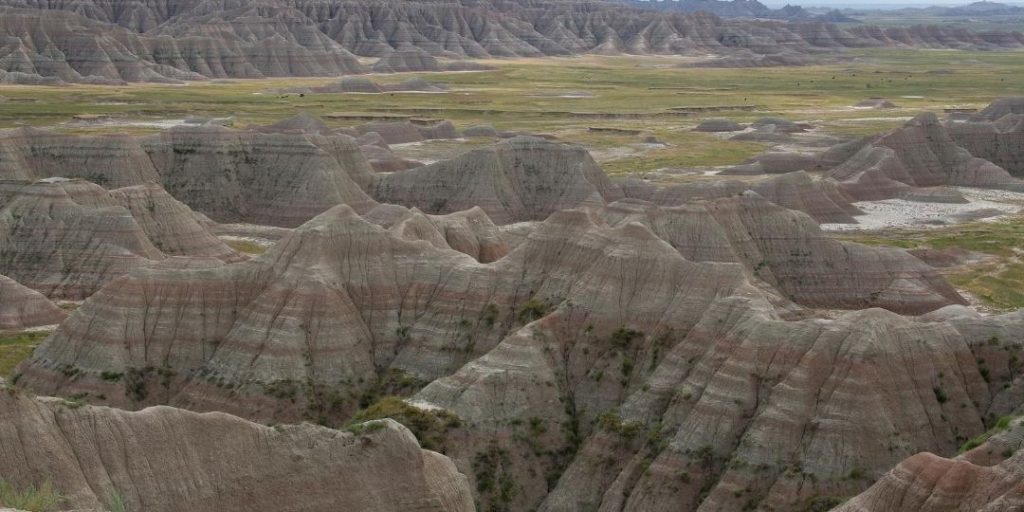 Throughout the world, badlands have a common feature: eroded rock formations that seem to defy gravity and physics. There are not many trees in badlands, but there are hoodoos—rock that has eroded into hundreds of miniature pillars—and painted canyons with layer upon rainbow layer of clay and other minerals.

Badlands National Park is one of the most recognizable of all the badlands throughout the world (aside from those that showed up in the Lord of the Rings movies). The Badlands are truly scenic and sprawl across thousands of miles, forming rolling grasslands inhabited by bison, bighorn sheep, prairie dogs and other wildlife, before merging with colorful walls of stone.

Where are Badlands Located Around the World?

There are many badlands to be found across the globe. One of the most popular examples of Badlands is located in South Dakota. The Badlands National Park has 244,000 acres of stony spires, pinnacles, and other fascinating rock formations to check out. There is also a mixed-grass prairie ecosystem that transitions into vast plains.

The Famous Badlands Around the World 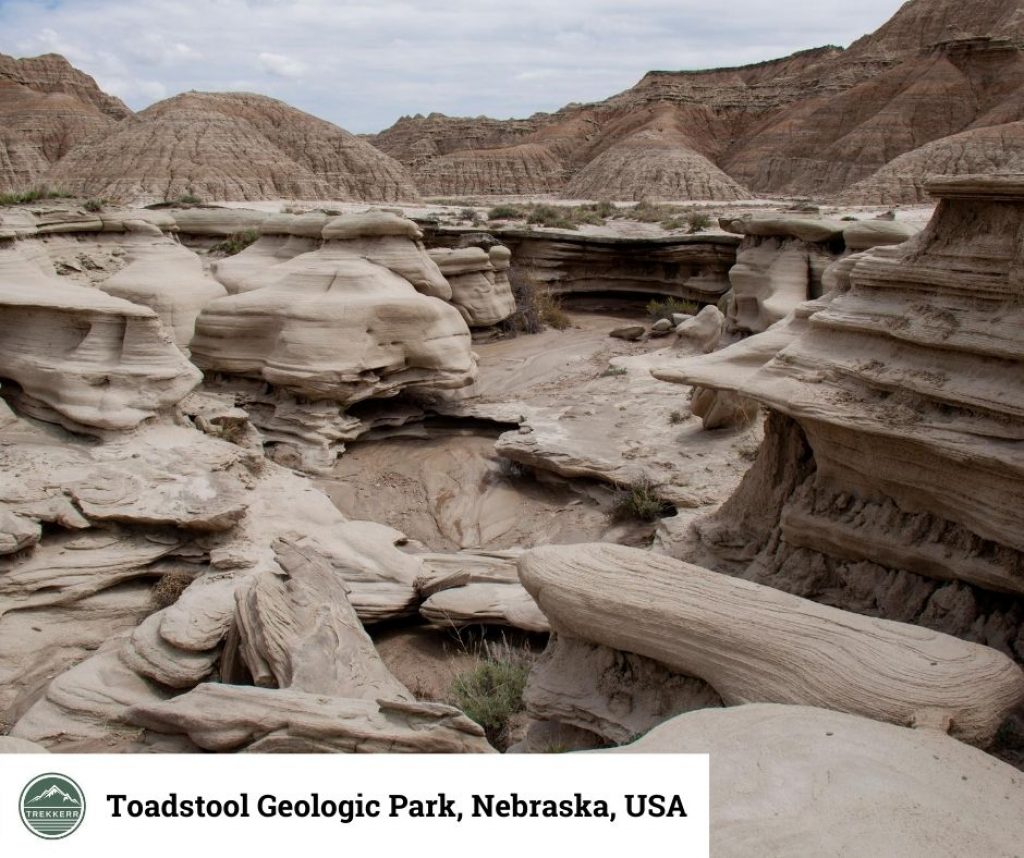 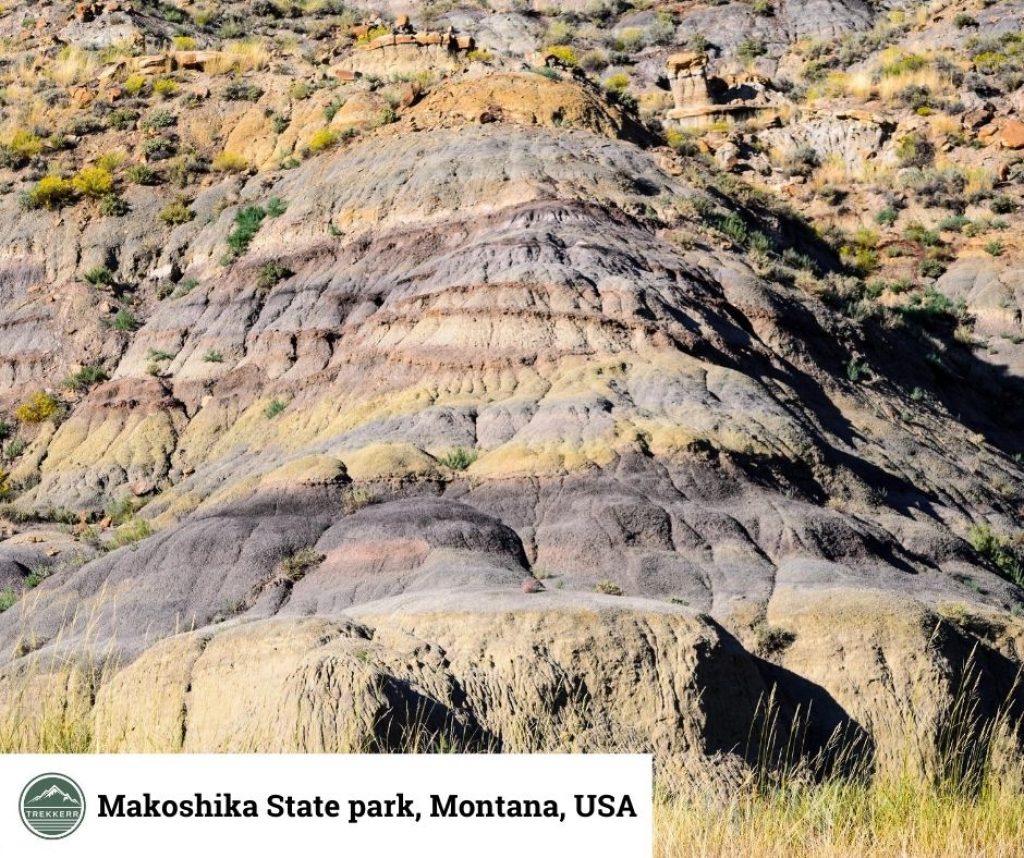 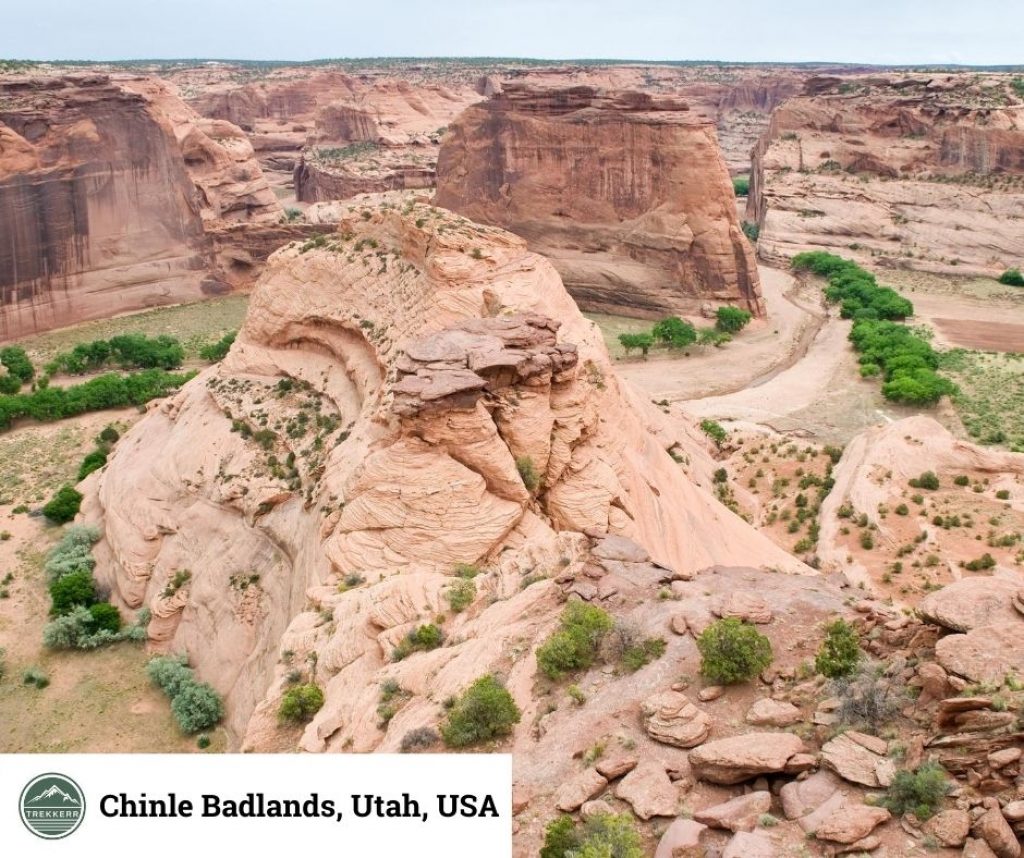 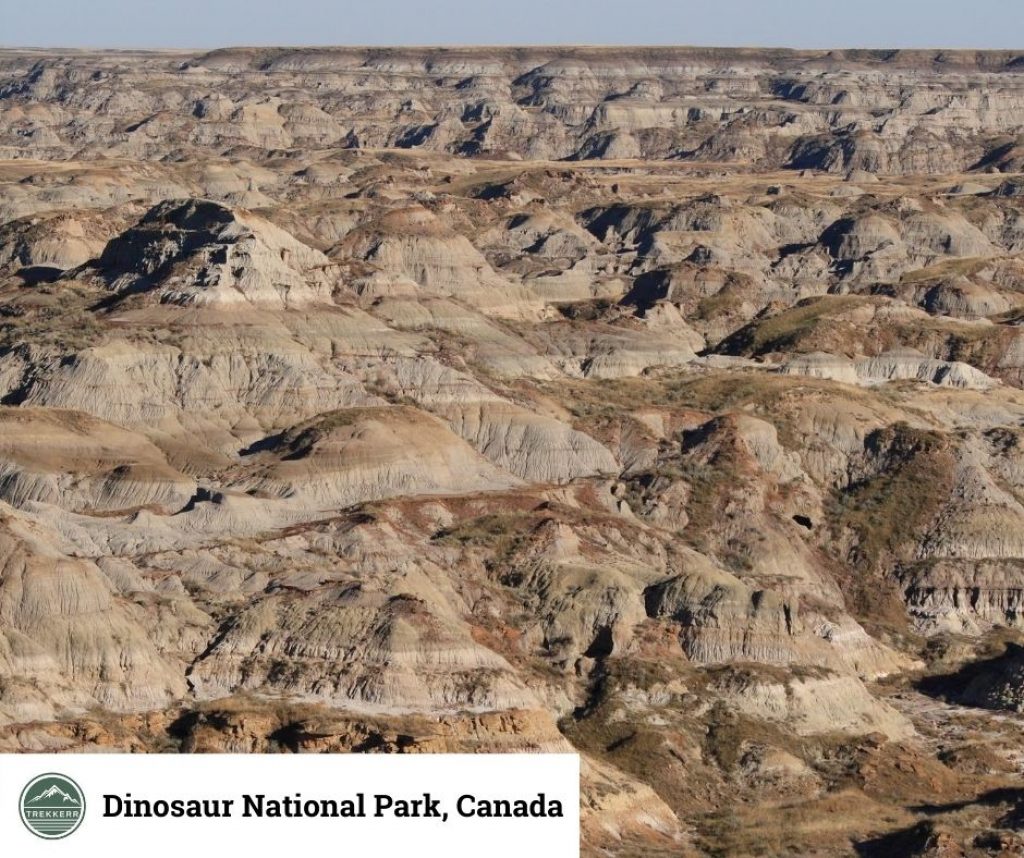 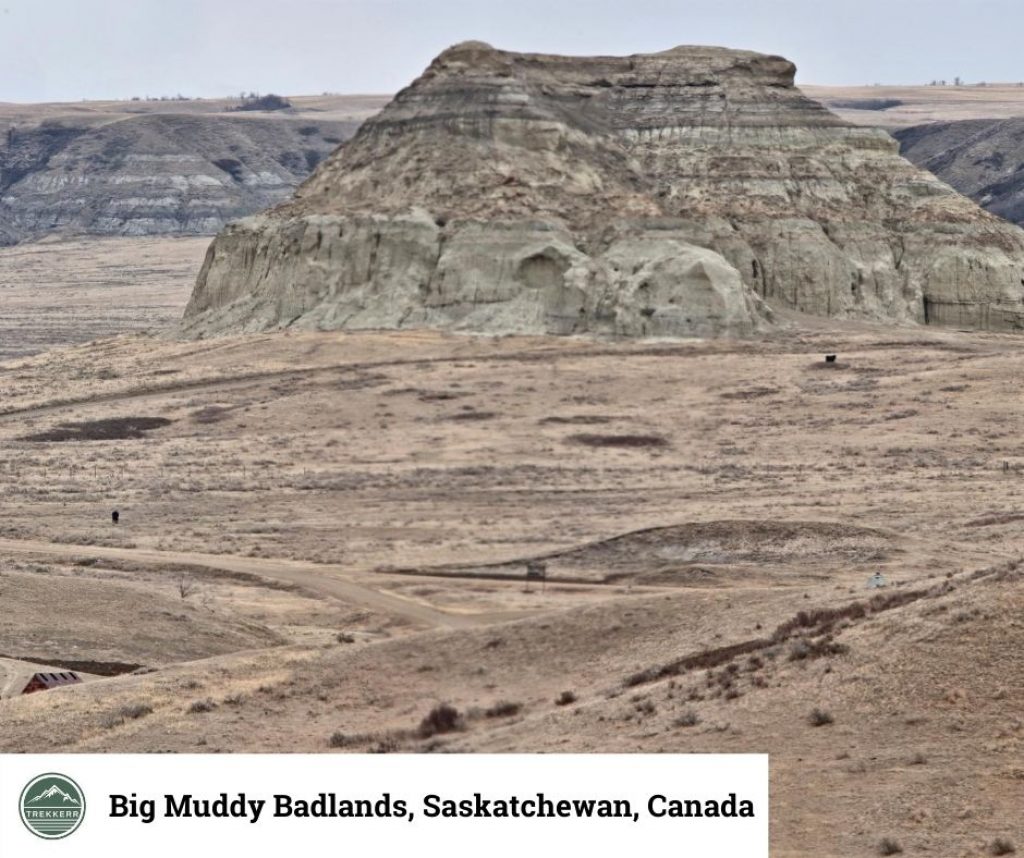 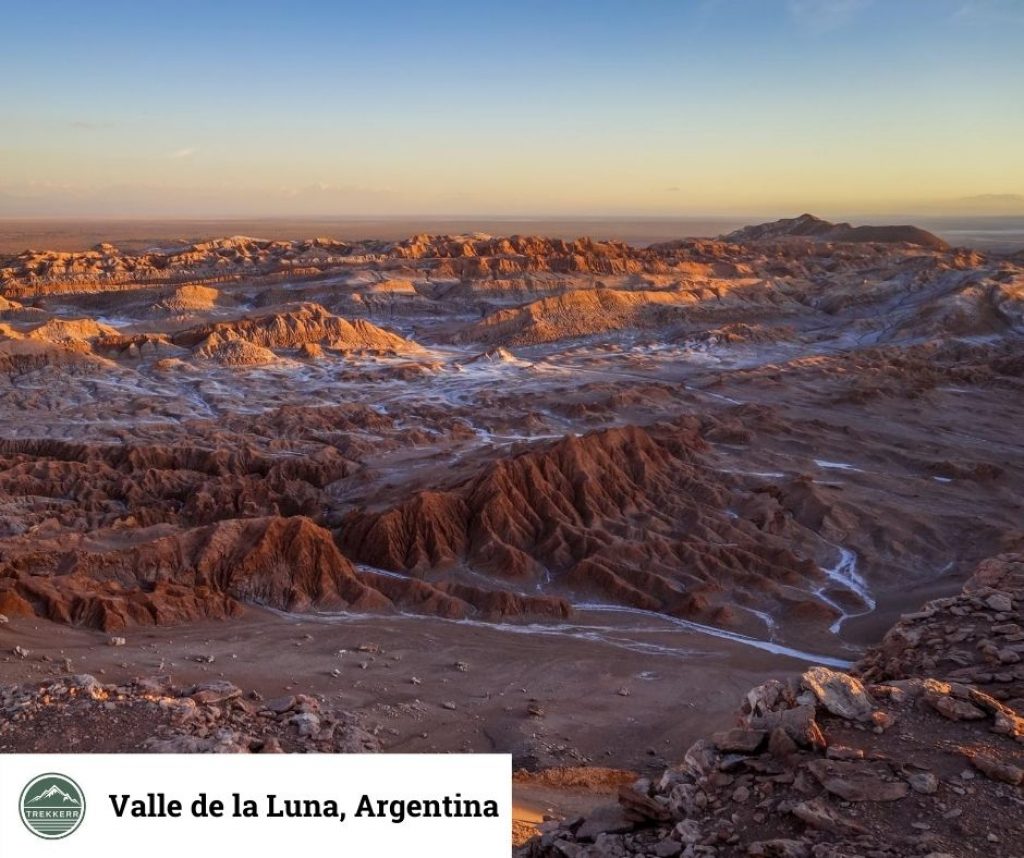 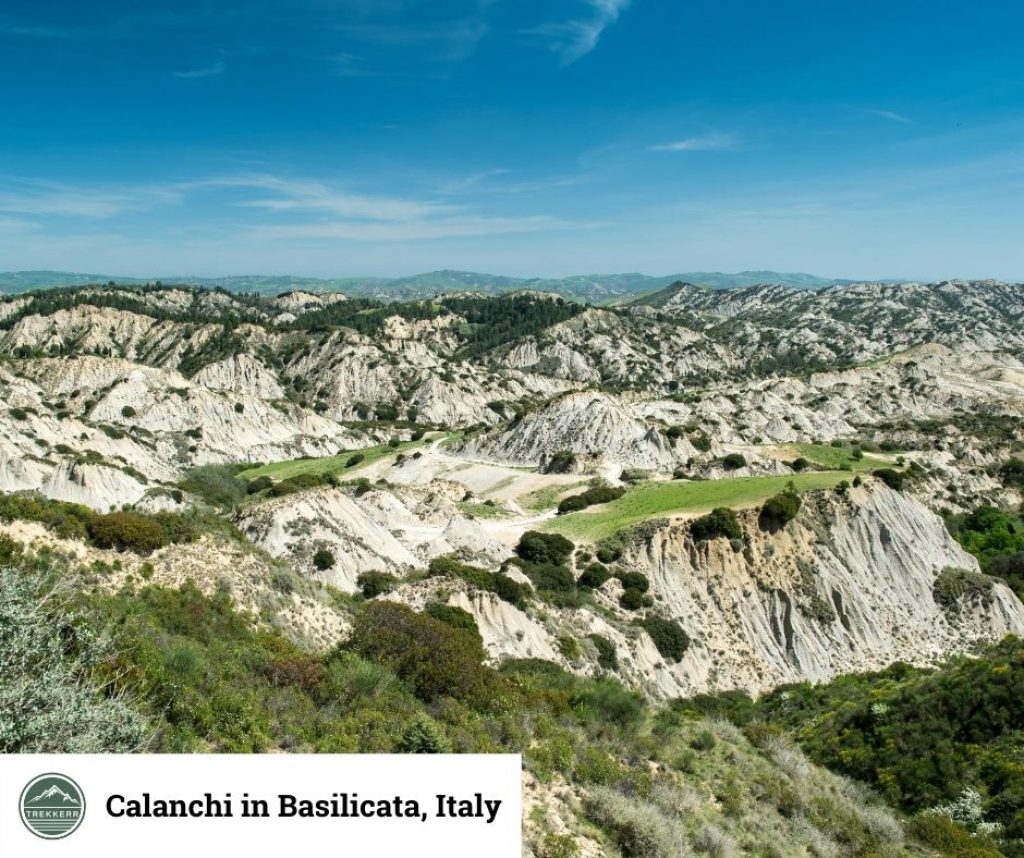 What is Unique About the Badlands?

In history and geology alone, badlands are interesting; the National Park is even more intriguing. Badlands National Park continues to be one of the most abundant sources of mammal fossils in the entire world. Many fossils date back to the Oligocene Epoch, which was around 33 million years ago. During that era, the common animals were things like sabertooths, three-toed horses, and other long extinct beasts.

Even if you are not interested in fossils, there are other unique features in the Badlands, too. There are active prairie dog colonies that will entertain you for hours, as well as herds of grazing antelope and deer. You may even catch a glimpse of one of the most endangered mammals known to man: the black-footed ferret.

Unique to Badlands National Park is also the rainbow-colored stone ridges that have bands of pinks, blues, yellow, and gray. Come spring, the prairie is covered in wildflowers, creating a kaleidoscope of colors every which way you turn.

Are the Badlands Dangerous? 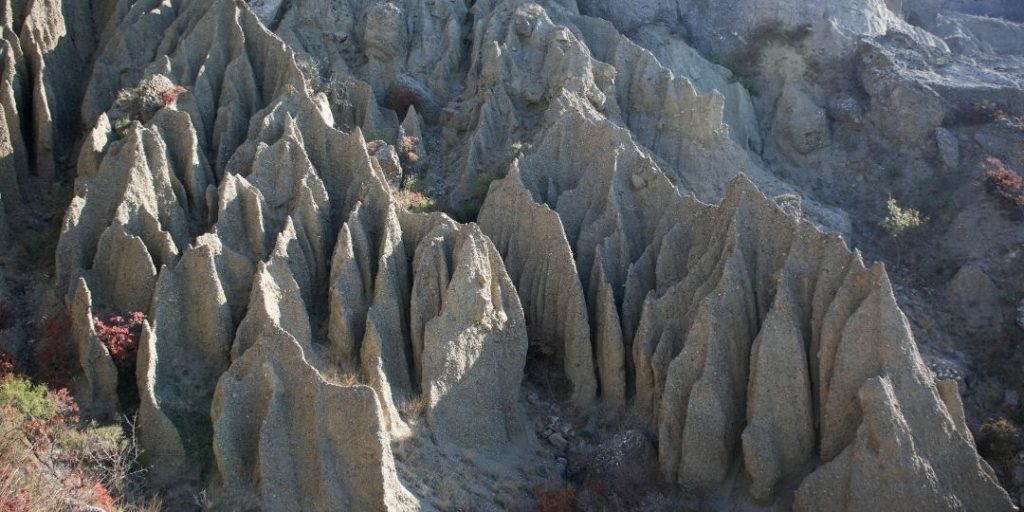 Because of the typical Badlands temperature and climate, it can be dangerous. The weather is unpredictable throughout the year, with average ranges between -40° F and 116° F. Wintertime is cold, and the park can receive up to 12 to 24 inches of snow annually. Meanwhile, the summer is full of thunderstorms and rain. June sees the most rainfall. January and December are drier.

The weather is not the only factor to consider! The roads are covered in gravel, making it slick at times. If you plan on hiking, be prepared for soaring temperatures. Dehydration, heat exhaustion, and sunstroke are all possible here. Come prepared—with water, sunscreen, a wide-brimmed hat, long sleeves, and pants.

Does Anyone Live in the Badlands?

While there are plenty of hikers in the Badlands, the only things that live there are plants and animals. As mentioned earlier, there are hundreds of animal species, including over 200 species of birds. Endangered plants and animals call Badlands home. Here is another fun Badlands fact: amphibians, reptiles, and rattlesnakes are also frequently sighted wildlife in the area. Step lively!

Are the Badlands Worth Visiting?

Yes! Out of all the Badlands facts we’ve shared with you today, this one cannot be denied: Badlands National Park is incredible. Breathtaking views, photographic opportunities, fossils, hiking, campsites, wildlife, and so much more await here! Just make sure you are prepared, and you will have an experience of a lifetime.

Now you know—the Badlands are called badlands because of the dry, rocky environment that cannot be cultivated. But that doesn’t mean you are going to have a bad time! Although humans might find the badlands inhospitable in the long term, you can see Earth’s majesty at every turn. If you ever wanted to go on an epic hike, consider Badlands National Park.

Have you been to Badlands National Park? What were your experiences! Let us know.

Best Hiking and Trekking Leggings For Men and Women

We will be happy to hear your thoughts

Best Tank Tops with Built in Bra for Active Women

When Wild Boars Attack, What Can You Do to Survive?

How Many Calories are Burned in Hiking?

How to Fix Heel Slippage in Shoes and Boots

Do You Have to Wear Socks with Climbing Shoes?

Ready to Climb? Here’s The Best Vertical Climber for Fitness